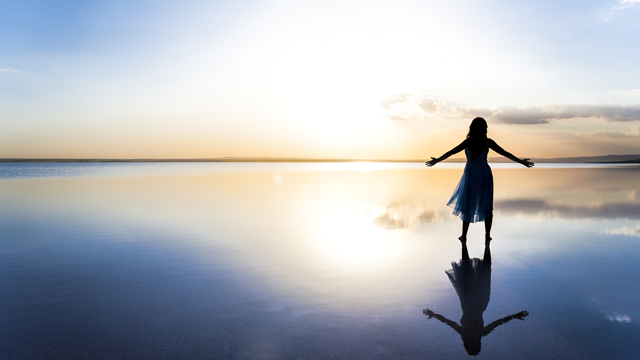 Humans pursue dreams and ideals to fulfill their lives, but in fact they are unaware that they do this because they are taken in by formidable traps. To liberate them from the traps, please let me first discuss the third-dimensional laws. In this third-dimensional world, everything is divided in two: light and darkness, front and back, life and death, day and night, big and small, merit and demerit. They are considered opposites, but at the same time, one cannot exist without the other. Similarly, humans are divided in two: man and woman. In this way two opposite polarities always exist as a pair and the world order is maintained because of this balance.

However, since we humans are the inhabitants of a world of opposites, we are unable to see the balance. Everything is originally “one”, but it is perceived as divided in two, and this fact makes us judge the quality of things as being good or bad, by separating one polarity from the other and then making comparisons. As a result, we avoid what we consider negatives and seek the positives.

But in this world of balance, seeking the positive simultaneously brings about an expansion of the negative, which becomes the driving force for seeking the positive, in the same proportion. When people shift to the positive in such a way, the negative behind it is reversed in front of their eyes as a negative phenomenon. If you reach for your ideal, you get close but fail. If your wish comes true, at some point it is suddenly lost. The reason you have unexpected experiences like this is because of this reversal.

What do you think? This is the third-dimensional trap that humans fall into since they perceive this world of balance as one of imbalance.

Let me give you an example of Mrs. S, who had hated her parents since she was a child, feeling a sense of inadequacy in her family, and who came to passionately seek her ideal world. After encountering the Miross System and acquiring a new viewpoint, she was able to free herself from the life that had caused her much distress and to discover her true utopia.

It was her family background that caused her to long for an ideal world. Her father, a lumber dealer, was ill-tempered and always yelled at his employees when giving instructions. As a result, she felt intimidated by his harsh voice and came to fear him.

On the other hand, her mother, pressed with taking care of eight children and housework, was always complaining and Mrs. S was forced to listen to her past regrets and worries about the future on a daily basis.

Mrs. S despised the suffocating atmosphere in her home, but she understood their difficult situation, and she tried to help them even though she was just a child. She tried to make herself appear to be independent to her busy father by taking care of her brothers and she voluntarily helped her mother with housework.

However, all she really wanted was her parents’ love. It was out of her longing for their love that she tried to be an appreciative child to them. Certainly, she managed to become a child who did not trouble her parents, but ironically, she began to feel that she was ignored and was not loved by them.

“Dad is always caring for his other daughters. It’s unfair!” “No matter how hard I work, Mom doesn’t even smile at me.”

As she came to despise her father, there was less conversation and mutual understanding within her family. This discontent made her long for a beautiful world of equality, justice, no contradictions, and love.

She tried to read, as much as possible, biographies of exceptional people as she started becoming interested in religions and spirituality when she was in junior high school. When she started working, she joined a religious group and devotedly learned its teachings. However, while she got married dreaming of a happy family and was even blessed with a child, her married life was not going well no matter how much she tried. She was constantly arguing with her husband, who did nothing but work, and often took her stress out on her children. Though the teachings of her religion were fine, she realized that they could not be applied to actual life, and being disappointed, she left the religious group.

Even after that, every time she sought her “ideal world” in religions and certain ideologies, contradictions surfaced causing her to stop believing in them. No matter what she did to achieve happiness, her life did not change. What was worse, her heart continued to be weighted down. It was at that time, being almost 50 years old, that she encountered a group based on an ideology which seemed to be her saving grace. Mr. and Mrs. S decided to join the group, sacrificing all their fortune.

Her parents and relatives were strongly opposed, but she did not listen. Instead, she thought she could prove them wrong by becoming happy and proving that the ideology was the answer and so they dove into it, refusing their advice.

However, unimaginable tragedy was awaiting Mr. and Mrs. S. Shortly after they thought that they had finally found their ideal world, they found themselves struggling even more. One year after they joined the group, their eldest daughter, who had started living in the groups’ residences the previous year, committed suicide.

The cause of her death was depression. They asked the group why she had been struggling mentally and what her life had been like before she joined it, but the group did not provide any feedback. Although Mr. and Mrs. S were starting to distrust the group, they had nowhere to go as they had already lost their house and money. Worse than that, they were devastated by the loss of their daughter and spent three years crying, with their spirits broken.

Nine years after their daughter’s death, they finally left the group. In spite of that tragic experience, they found themselves attracted to another ideology.

It was based on intensively positive thinking that did not give any openings to negative thoughts. They thought, “This is something we can finally trust”, and started learning the ideology. Mr. S studied hard to become a teacher of it. Nevertheless, the more they mastered it, the more contradictions they felt, and negative thoughts that had been suppressed began to manifest themselves. The more they tried to conceal them, the more intense their emotions became, which were impossible to handle. Eventually, they left the group.

Every time she bet her entire life on what she believed, she felt betrayed. Eventually, she became unable to do anything.

What do you think about her story? There are many people who continue to wander about the world of spirituality, craving the truth of this world or their ideal world. However, as already mentioned, those who are unable to perceive the balance of this world see the world of division and continue to struggle against it forever.

The reason why she did not feel loved by her parents was because she “loved them”. Her fear of not being loved made her pick up on her parents’ words that made her think they did not love her. As a result, she came to despise them, “who did not love her”. In the third dimensional world, love always goes with fear, and can change to hatred at any moment.

Desperate as she was, Mrs. S did not give up seeking answers in this world, and finally encountered the Miross system. As she demystified her life through the system, she became free from the traps of the third dimensional world.

No story can begin without the relationship with one’s self. In other words, your story is created based on what you give to yourself. The application of the Miross system makes it possible to reset the fundamental relationship by returning what one feels towards the other party back to himself/herself.

Since she did not love herself and treated herself unfairly, she shifted to fairness in order to regain balance and longed for her ideal world, pretending to be a person of love. As a result, her relationship with herself was reversed and manifested as an unjust world. All these process occurred unconsciously. Every human unexpectedly lives a life that was actually written and enacted by himself/herself.

Mrs. S, who saw the whole picture of her life, understood that her life was shaped by the third-dimensional laws. She then felt the tension in her body disappear suddenly and was filled with an unshakable sense of security and peace. What she saw before her eyes started changing dramatically.

She had been seeking her ideal world in the external world for a long time, but now she realized that true peace, or true paradise, exists within her.

What do you think? Humans have not been aware that the third dimensional world is based on balance and have been seeking the positive from a position of negative. As a result, not just individuals, but also humanity itself is being caught in a gigantic whirlpool of the phenomena of “reversal”. However, when each of us understand the Miross system, it is possible for us, with a new viewpoint, to remove ourselves from the whirlpool and transform this third-dimensional world into a higher-dimensional paradise.