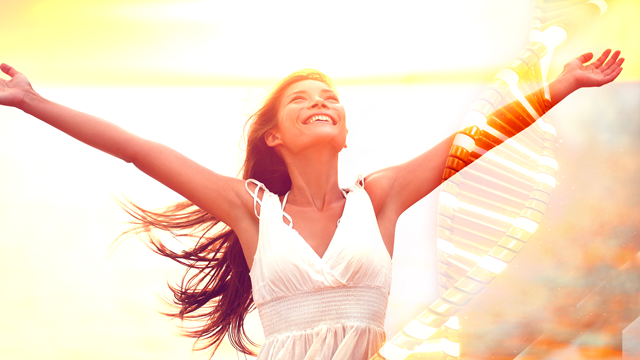 Research reveals that an infinite amount of information resides in human DNA and that we use just a few percent of it during our lives. While researching such mysterious subjects, switching on and off DNA has come into the spotlight.

If we are able to consciously switch off the part of DNA that negatively affects our lives while switching on the part that has a positive effect, it will truly open the door to the potential of humanity.

We present the case of Ms. K, who experienced a breakthrough to her true life path, as if the DNA was awakened by the Miross system, which enabled her to transcend the conflicts with her parents.

Switch On Your DNA!

While she was young, watching her parents caring only for her younger brother, she thought her parents loved only her brother and so she hated them. So she started rebelling. Once she became an adult and lived by herself, she paid no attention to them whatsoever and almost severed a relationship with them.

She wanted to get back at her parents who did not love her by becoming successful in business. This negativity in fact became her driving force in life.

But things did not go as she desired. Although she felt a sense of purpose in her job and achieved positive results at first, it stopped being fun and she was hindered by her interpersonal relationships. She changed jobs but nothing changed.

It was at this time Ms. N encountered the Miross system. She discovered the answer to the question: “Why isn’t my life as I hoped?”

No matter how much you dislike your parents, you cannot change the fact that you are born to your parents. As she understood the Miross system, she began to realize that unless she resolved the conflict with her parents, nothing would go well and she would not live her “true life”.

Ms. N was surprised that she had rejected her own genetic information. But what astounded her most was the fact that the self-negation in her unconsciousness was reversed in the world before her. Therefore she had created a world where she felt unloved by her parents. Up to that point, she had held a grudge against them, believing that her parents were the reason she was unhappy. But this changed instantly like a magic.

Thus she clarified her unconsciousness for the first time by reversing what she had felt toward her parents as her own inner consciousness. As a result, she was able to understand the life she had created by using her unconsciousness as the driving force to escape from her undesirable situation.

“Nobody is responsible for my life because nobody understands the mechanism of this world.”

The moment she realized this, she sensed the anger, hatred, and revenge she had felt toward her parents disappeared, and felt the tension disappearing from her entire body. She even felt silly for inflicting suffering on herself and so burst into laughter. At the same time, she felt a sense that “Everything has been all right with my parents” that emerged from deep within her. Thus, she was able to completely accept herself, as she was born of her father and mother. At this moment, her life was reset completely.

Around this time, she was planning to leave her job. She decided to embrace this new process as a sign of being reborn.

One day, she remembered an activity she had enjoyed as a child. She used to look at the design of various printed materials such as advertisements, magazines, and stationeries. She still liked that as an adult. She had never considered working as a designer, but Miross helped her realize that what she liked was actually information embedded in her DNA. Thus, she simply accepted her feelings and was excited at the thought of doing design work.

As she was drawn to designing, she began to attract what she needed and her dream started to take on a particular shape. She received a job offer from a traditional design company affiliated with the vocational school she had attended.

“I can get the job I wanted in this company!”

She went on a job interview at this company. There were some tough questions at the interview, but she understood that her unconscious anxiety was reversed in the interviewer, and so she simply listened to him without making any judgments. Then the atmosphere suddenly changed and their conversation continued on the assumption that she would take a job with this company. She was single in her late 30’s, and had no design experience, and could not even operate a PC well. However, despite these disadvantages, she was hired by the company as she hoped.

When she started working at the company, she realized how much she enjoyed her job, and felt grateful for the wonderful work environment where she was paid for doing what she loved. She soon mastered a PC and its design software and became able to create advertisements all by herself. Everything in her life was going well, as she no longer had interpersonal conflicts where she worked.

Nine months after she started her job, her boss encouraged her to work at home as a contracted designer. She accepted the exceptional proposal without hesitation. That enabled her to work freely without being constricted by time while doubling her income.

Additionally, some amazing things started occurring, including achieving the top sales spot in the department one year after she started working as a contracted designer. Her life had actually been reset already, and her fate changed.

There was a reason why Ms. N, who had no previous experience in the design industry, had such tremendous potential. For many generations, her family worked in creative careers. Her father was an architect of dams and tunnels. Her mother taught traditional flower arrangements. Her younger brother was a clothing designer who was well known in both Japan and overseas. Her grandparents were tailors. Ms. N’s DNA was full of creativity, in a wide variety of fields.

During the period of her life when she hated her parents and resisted her own genetic information, her life did not go as she hoped. However, by reversing what she felt on her parents toward herself, the information in her unconsciousness was reset and at the same time her latent DNA was awakened. At this moment, her true life path started.

How did this story make you feel? Using the Miross system to be receptive to the information in your unconsciousness, or by reflecting what is inside to the external environment, it is possible to create a completely new dimensional space. I call this space “High Dimensional Space by Reversal with Anti-Vector”. In this domain, incorrect information is corrected, and new energy simultaneously created gives new life to the outside world.

Miross takes people back to a state with unlimited potential and regenerates their lives. My hope is that in the future, genetic engineering will prove that this does indeed exist and so can be utilized to transform humanity.