Messages of peace and love were spread to the world from Kashmir, known as Paradise on Earth

On August 10, 2015, Rossco, at the invitation of Funkar Cultural Association, addressed a large audience of scholars, academics, intellectuals, mass media, artists and students in Kashmir, which is known as Paradise on Earth, thus embarking on his journey to spread his message of absolute peace and love to the world.

The occasion was attended not only by Indians but also German and Norwegian nationals. There was enormous interest expressed by many of the participants on the New Dimensional Thought Technology called Miross that they heard for the first time. A noted and well-known historian and Sufi Master, Professor Fida Hasnain, was also present. He expressed his view that Miross should be spread not only in India but also throughout the world for achieving true love and absolute peace. He also asked Rossco to come to Kashmir and other parts of India on an annual basis to spread his message more widely. The German and Norwegian participants also requested Rossco to come to their countries to share his messages.

Below are some articles published in newspapers reporting the event as well as a feature article on Rossco taken up by the July issue of Kashmir Insight. 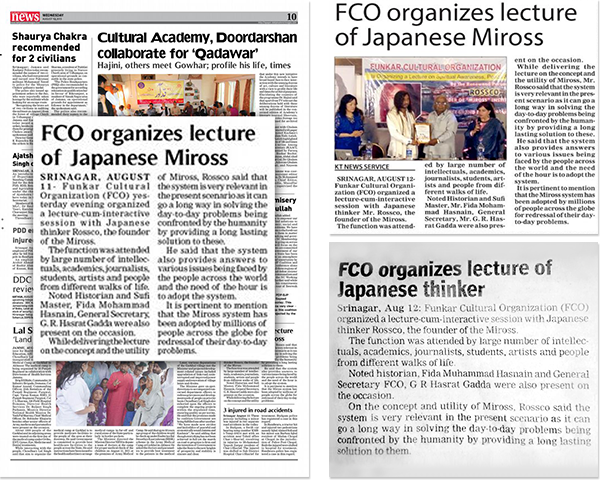 We have also received the following messages from some of the participants.

“All of us were truly pleased that Rossco, the guru, came from the Land of the Rising Sun to this part of the world (Kashmir, Paradise on Earth) and shared his message of love and peace for humanity. The new dimensional thought technology for transcending the third dimensional world, that Rossco guru introduced, is quite revolutionary and inspirational in this present day environment where we are trapped by various third-dimensional deceptions. I have learned the secrets of true self-development and wish Rossco, the guru, and his team great success in their future activities to spread the message of peace and love throughout the world.” Mr. Ishtiaq Fida, former vice-president of Jammu Kashmir Bank

“As a medical doctor, I was very impressed by Rossco guru’s lecture. After listening to it, I am convinced that it provides answers to all aspects of problems, including depression, anxiety, neurosis and psychological diseases which are on rise due to the hard and fast life prevailing in the world. There is a great scope for humanity with the healing touch and magic that the great guru Rossco is sharing. I was extremely impressed and I recommend people from all walks of life to learn his teachings”. Dr. Gowhar Ahmad, Florence Hospital

“He is an enlightened Master and is doing wonderful work to raise the human consciousness to the fifth dimension. He is truly compassionate and he wants to awaken human beings who are asleep in the third dimension. I am thankful for his visit to India and do hope that he will visit more often”. Mr. S. Yasser Kazmi, CEO, Myasa Network Solutions

“Mankind is on the verge of an evolutionary leap into Consciousness. Basically we are shifting from third-, to fourth, right to fifth-dimensional domains that we also call the “Enlightened Reality”. We need to understand this Enlightened Reality and prepare ourselves to reach these higher-dimensional domains, where Peace, Hope and Happiness can all be found. Rossco is a commendable teacher from Japan who has shown a practical method called Miross to return to the life source and consciously reformulate a new life by performing a complete reset. I truly want more and more people to understand this system called Miross and achieve a life of Happiness and Hope without modern day conflicts, turmoil or unhappiness. My best wishes go to Rossco and his efforts in spreading his message.” Prof. Professor Fida Hasnain, Historian and Sufi Master 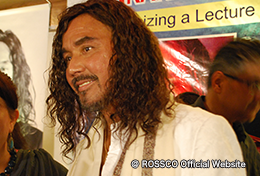 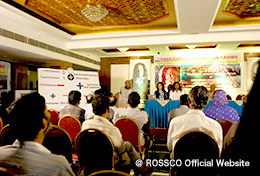