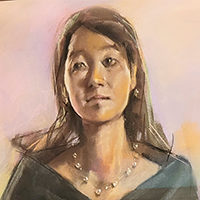 Originally, one consciousness was divided into two. We’re born with bodies that are male or female. To return to the original one. To experience the One.

When I first came across Miross, I experienced a huge sense of separation from my partner. He was like, “Choose either Miross or me!” and broke the DVD and threw my Miross flyer into the air. Still, I desperately wanted to study Miross! So I secretly started attending the Perfect Marriage course. (Perfect Marriage course: Old Miross curriculum)

For three and a half years, I hid my study of Miross from my husband. Then I really wanted to take another course, called the Miross Specialist Training Course.
At that time, it was only held on Saturdays and Sundays, so it was no longer possible to hide it from him. Standing at the precipice, these words came out of my mouth: “I want to learn Miross because I want to fully understand you.”

For the first time, I put my partner at the center of my life, and just like that he became supportive. And the moment I realized that I wasn’t looking at him at all, he began to paint a picture of me.

From that point on, I began to frequently experience my consciousness as a picture he painted.

When I was consciously feeling my viewpoint, big eyes appeared in his paintings. When I felt like a weightless space with no top, bottom, right, or left, a fantasy-style work showed up, with me floating in the air with figurines and pots .

I come from a family of educators. My mother and father are teachers, and my father’s family was devoutly religious. Each morning and evening, the whole family gathered for Sutra recitation in front of the altar, which covered the entire wall of a room in our house. My father chanted the sutra by heart as a matter of course.

Unknowingly stuck in the deep-seated thought traps of the educational and religious program called Father and Mother, this identification created a lot of “things I couldn’t see or hear.”

My liberation through the practice of Miross was unbelievable. I felt great joy when I could feel the Programmer that I had never actually felt when I was practicing religion.

This analogy is often used: Helen Keller, who was burdened with triple physical challenges, connected the water overflowing in her hand as “WATER!” and the moment she made that connection, she suddenly saw the world! I think it was just like that for me.

After realizing that what I had thought all along was love actually wasn’t, I experienced the miracle of becoming able to feel the depth of love and what love really is.
This wouldn’t have been possible without Miross.

We continued to have experiences like this. Recently, my husband’s painting was displayed for the first time in an exhibition and sale at a department store.

When I saw his painting among many others on the flyer, I felt that I liked his painting the most. It had high purity and a different dimension. At that moment, I knew I had come to love myself.

His painting is my mirror. Until then, I was dissatisfied with myself because I felt something was missing. A week later he was informed that he had won a major award for a large painting that he exhibited.

This was the first time he’d won an award as a painter. He said that the two art critics who judged the competition understood everything he expressed in his painting without being told, which was even more miraculous and gratifying than winning the award.

I had known him since our college days. While friends all around him were receiving recognition and winning awards, he didn’t receive praise or awards, and was far from being recognized. When he we graduated from college, he broke his brush and said to me, “You’re the talented one. You should paint.”

But five years after we married, he became an art teacher and connected with the world of painting again. As my understanding of Miross grew, we began experiencing things such as winning awards. This was truly the first time he was recognized with deep understanding by the art world.

I attended the award ceremony and the critique session in Tokyo. I was so grateful and happy to hear the critic explain with great joy that the painting was “very intelligent and new,” as if he had deciphered a code from a seemingly ordinary still-life painting.

At this point in my life, I experienced a shower of love through the lecture titled “Abundance” in the Miross Specialist Training Course, When I heard the phrase “God can only exist in love that is fulfilled,” I had an intuitive sense that “When you create a picture without ego, that’s where God dwells. Whoever sees that picture can communicate with God.”
I was so happy that I hurried home to tell him.

He accepted it readily, saying, “I see what you mean, clearly.” I realized that we were headed in the same direction in our lives when he said, “A picture is a shrine.”

Because we are originally one. The system is an equation of love returning to one. The separation was to experience one. The time has come when everyone can complete their love story, and I too am of that process.

A new Miross curriculum is about to be born. The time of love has come, when many people can experience the “Originally One” while also having a physical body, and they can continue to experience the program beyond that.

My partner, who once broke my Miross DVD, is now taking the new curriculum with me. I allow myself this opportunity to experience the future called “the present”, which was unthinkable when I was secretly attending the PM course alone, hidden from my husband.

To Mr. Rossco, Midori, the Programmer, and all the friends who are with us to support us: Thank you so much for everything you do.

I can’t help but feel the world of partner-unity love that Mr. Rossco and Midori show us. I can only be truly grateful for the door that has always been open in the love of Programmer.

I will continue to proceed with my life by practicing Miross.
Thank you all for your continued support.