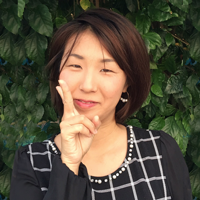 Ending the Search for External Light

We say that life is full of ups and downs, and sometimes it feels like riding a roller coaster. Some say this is what makes our life more interesting. But, do we actually want these ups and downs happen to us all the time? Don’t they often destroy our peace of mind?

Here is an actual story of a woman, who was overwhelmed by “riding a roller coaster” in her daily life and wondered why this occurred. But she found the answer when she encountered Miross.

My life began to change when my sister was born

I’m 30 years old and feel like I have a perfect life with my husband and child. But, before I encountered Miross, it never occurred to me that I could find a peaceful and secure life.

My sister was born when I was two years old. I was jealous of her, because she got all of my mother’s attention. I began to compare myself with her and we developed a strong sibling rivalry, which made our relationship fall apart.

My sister was cheerful and was very popular at school. In contrast, I was gloomy, silent, and friendless. She was good at everything and I wasn’t. From my perspective, my mother liked my sister more than she liked me.

“Pay attention to me!”

I often shouted this in my head, but only received negative attention from my mother. I tried to stop myself, but I just couldn’t resist bullying my sister. As a result, my mother often punished me, saying, “Why do you bully your sister? Don’t you understand how she feels?” I gradually came to view myself as a cold person, and started to hate myself.

However, the circumstances were reversed at school where I was bullied. “I’m here! Look at me!” Eventually, I found a purpose for my life – “Attract more attention than my sister”.

The Ups and Downs

In junior and senior high school, I belonged to a volleyball team. Fortunately, I had a good trainer. I started to excel and received much attraction from the media. But in reality, I only put up with this because I wanted people to pay attention to me.

My six years in the volleyball team exhausted me both physically and mentally. I was determined to make a new start – at a university far away where I didn’t know a soul. I changed everything about me, including my hair, my clothing style, habits, and even my character. I felt like I was reborn as a different person. I was thrilled that I was finally popular. However, after only three months, I felt exhausted mentally and decided to leave the university – I had no friends and lost popularity. I felt like I lost everything.

Even when I felt that I achieved something, I ended up losing it. Devastated by this repetition of success and failure, I turned to spirituality to find the answer to my life. However, traveling overseas or attending expensive seminars did not change me at all. I hated myself more than ever.

In spite of this, I could not stop looking for success. I began to work as a bar hostess in Tokyo, and began to be recognized and became popular. I received a rookie-of-the-year award and was honored on stage. I dressed in a gorgeous outfit and attracted attention from everyone – I was at the top of my game. But immediately after, I felt something broken inside me. I lost my will to live. Then again, I found myself attending a seminar held overseas.

I eventually encountered Miross and was able to demystify why I had been leading a life going up and down like a roller coaster. I also met a man, who turned into my husband. I finally managed to resolve the issues in my difficult life.

After I understood the Miross system, I realized that the answer to everything does not exist outside. It exists inside. I understood that in the external world there are no bright spotlights, but my true self exists inside of me. By fully realizing and internalizing this, my life completely transformed and I now have a perfect command of my life. Everything happens as I wish and even others around me are “infected” with this magic. Just unbelievable.

I cherish my life with my incredible family, and it feels like I am introducing myself to an entirely new world.

What do you think? When her sister was born, she assumed that her mother did not love her anymore. As a result, she was obsessed by the thought of “Pay attention to me!”. This was a circumstance that she had created and perpetuated all by herself.

She blamed herself for not being loved by her mother. Instead of focusing on herself, she was obsessed with getting attention from those around her. This was because that she did not admit the existence of her true being but sought joy in her external environment. Everything she had seen in her life was just a reflection of her inner conflicts.