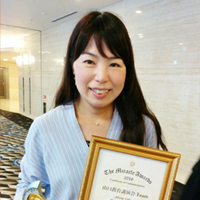 Dealing with My Stalker

The number of stalker cases nationwide acknowledged by the police in 2015 was 22,823. To tackle this, the government introduced the stalker regulation law, but we have to admit that its effectiveness is doubtful as the number of victims of stalker cases has still been increasing. Facing this situation, where crimes continue to threaten us in spite of the law, which was designed to protect the victims and punish the perpetrators, many people may conclude that there must be an intrinsic limitation within the system of the law itself. Here we will share how a woman who had actually been stalked managed to escape the predicament when she understood the system of the relationship between a victim and a perpetrator through the Miross system.

When I was working earlier as a salary woman, I met a man from a rural area and started dating him. I was enjoying this seemingly “normal” long distance relationship. Though sometimes I was afraid of the stern language that he used, I thought they were expressions of his concern for me.

However, his speech and behaviors began to aggravate. He sometimes lost his temper, even over trivial matters, and yelled at me. He then started to monitor every move of my life; I had to email him after I got up, after work, and then call as soon as I got home. I was even obligated to report to him when I ate, took a bath and who I talked with. Even though he was far away, it seemed like he was right beside me and I was so scared. He had power over me physically and mentally, and I felt totally controlled by him. Whenever we met, he beat me up and when I tried to defy him, the situation got worse. Finally, he threatened me when I tried to break up with him.

“Why do I have to go through such a horrible relationship?”, I kept asking myself. When I was going through this, I encountered Miross and to my surprise I discovered an incredible truth

I have a sister who is one year older than me. In our family, since there is no male sibling, my sister was expected to be the successor. She was active, extroverted, and was the center of attention and got special treatment – at least that’s how it appeared to me. When I was a child, I often saw my parents fighting and I was always afraid to see my father shouting and beating up my mother. Normally, my father was a man of a few words and was a good-hearted person but whenever he drank, he changed drastically and became violent towards my mother and with that, my fears grew proportionally.

My mother did as my father said, but she often yelled at us, channeling her anger with him to her children. My father was bullied at his company and once tried to commit suicide. He suffered from mental instability, and that was directed toward his family in the form of violence. I felt that I was not loved, and was sensitive to feelings that I was not loved by anyone. I finally decided to leave home, as I did not think I could be happy in this family and could not find any place for myself there. So I left, seeking a real sense of being alive. When I thought I had finally fulfilled my hearts desire by having a place of my own with a new job, I met this man.

As for his background, he was left in his grandmother’s care soon after his sister was born, and because of that, he craved his parents’ love and always felt lonely. Furthermore, his grandmother was a disciplinarian and he was often punished physically.

His father was a doctor and demanded high academic achievement, and because of this, he could not do what he wanted and was always forced to study. He was not able to become a doctor and was left with a sense of guilt and failure. He simply wanted to be loved by his parents and wanted his mother near. Since he was young, he felt a lack of love, and thus he wanted to monopolize his mother’s love. And he too was seeking someone who could accept him.

Through the Miross system I came to understand that we were attracted to each other because of the exact same emotional wounds – a lack of love. I was shocked to understand that what I as the victim and he as the offender had are identical. “Please accept me!” “Please pay attention to only me”. These are the emotions that I had hidden inside and that attracted this man. Ironically, my desire was fulfilled by the fact that I was under his surveillance for 24 hours a day.

The two of us had the same qualities, but one blamed herself and the other became violent towards those who didn’t accept him. How these emotions manifest themselves varied but they fundamentally are identical. The offender and victim relationship was created by my masochism along with his sadism. To see it from a different perspective, it is a tragedy that occurred without either of us knowing the system of relationships, and as a result we fell into a trap.

Once I became aware of this trap through the Miross system, I also learned that my feeling of not being loved was a mere illusion, and then I was freed from this man for good. Furthermore, my parents who used to have the worst relationship now get along very well. I now moved back to live with my parents, and even petty things like going shopping together or drinking together makes us so happy. It is also very comforting to see my parents relaxing together on the sofa.

How did her story make you feel? The problem of stalking is increasing and becoming a serious social issue, but we don’t seem to have a clue how to address the problem at the root and then solve it. If each and every one of us can understand the system of relationships, we will be able to prevent such social problems and protect ourselves and our family. The Miross system makes it possible for us to actualize the world, which will no longer create victims or perpetrators of stalking.