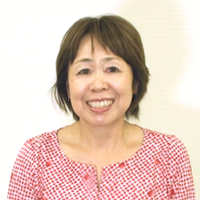 A Morning without Pain

Rheumatism causes joint inflammation and involves acute pain. This disease is found worldwide, with Europeans having a particularly high incidence rate. It is considered difficult to identify the cause of the disease, and its cure has yet to be found. Despite this, there is a woman who was released from the pain she had suffered through 12 years. She achieved it by understanding the pattern of her life through Miross system. Then, what on earth was the system?

I was always putting myself last.

I am the eldest girl of 3 children, growing up as Japan began to recover from the aftermath of the Second World War. My mother was busy managing a day-care center, so I had to take care of my younger brothers. As I grew, I began to truly respect her. I became a nursery teacher and worked with her in the day-care center.

I married my husband when I was 27 years old. My new life started in his house, where my husband and I lived with my parents-in-law and my sister-in-law. I always tried to read their moods because his parents were difficult to please. I had to put my needs last, and had to perform tasks for them, including massaging my father-in-law’s legs every night.

After I almost finished raising my children at the age of 49, I experienced acute pain throughout my body. It was diagnosed as rheumatism. It is a connective tissue disease, and the cause of the disease has not clearly been identified.

My body soon began to stiffen. The medicine the doctor prescribed had some limit to its effectiveness and even when it worked, it only cut my pain in half. My unbearable pain continued without a break and I purposely had a several doctors prescribe painkillers so that I could have more pills. The doctors naturally told me to stop it, but I didn’t. It was so excruciatingly painful that I thought I would rather die than tolerate such an agony.

I was completely reborn.

In the middle of such desperation, I heard of Miross through my friend. When I attended a Miross seminar for the first time, the teacher asked me,

“Are you treating and taking care of your body well? Do you love yourself?”

I burst into tears, but I didn’t know why at that time. I started to learn the Miross system and looked at my life, which enabled me to understand what was happening. When I was young, I had to take care of my brothers. After marriage, I was totally devoted to taking care of my father-in-law and other family members.

I never thought of taking care of my own body. I had never thought I loved myself. However, after I studied the Miross system, I understood that I had mistreated my body, and was grateful to be alive at that exact moment, no matter what condition my body was. It was exhilarating to learn why I had been suffering from the disease.

At that instant, my long-standing pain simply disappeared. Surprisingly, there wasn’t even any pain the next morning. I remembered even experiencing extremely excruciating pain like being drilled with an auger at times. I could not have believed such a delightful moment would come, after being in agony for 12 years. Since that moment, I have not taken any medicine for rheumatism.

I’m 61 years old, but I feel my body has been completely reborn. I now feel excited about what kind of future I will be able to create and enjoy with my husband.

What do you think of her story? She was able to understand her thought pattern by applying the Miross system. She had believed that putting others before herself was the only way for her to be loved. She also realized that she had created a difficult life for herself by denying herself and working hard, using self-denial as her driving force.

Pain from rheumatism is believed to occur because the body is attacking its own cells and tissues. When she stopped attacking herself the thought pattern that she had inherited from her parents ended. As a result, the pain that had lasted for 12 years disappeared in an instant. New-dimensional thought technology Miross has a power to even transform human lives at the DNA level.