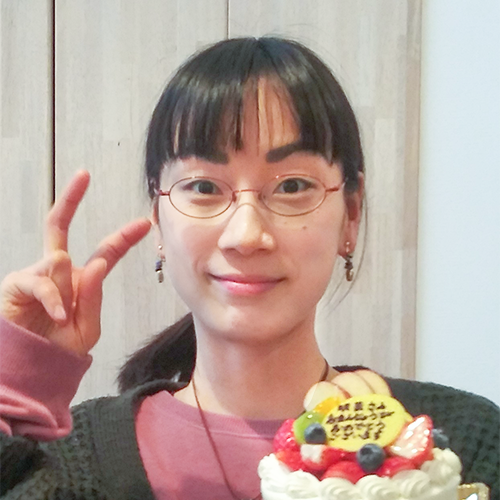 I first met him last summer. Up until that time, I had been so mentally stressed that I had become ill and unable to work, so I resigned.

I spent my days recuperating because it was too hard to do anything. I knew that I couldn’t go on like this forever. So, to improve my physical condition I decided to go to a chiropractic clinic that aimed to heal the autonomic nervous system on the fundamental level.

During the course of several visits to the clinic, I talked a lot with the doctor treating me, and I began to feel that his way of thinking and way of life were amazing. I was especially happy when he said to me, “I’m your friend!” It was the first time I had ever heard a man say that to me, and I was so happy that I almost cried.

Then the doctor told me that a patient he used to treat was looking for someone to do housework for him. He suggested that when I feel able and well enough I should go there as a means of rehabilitation. But I was still very anxious, and when I heard that the owner of the house was a man living alone, I was scared, so I decided to put the matter on hold.

After a while, my relationship with my father gradually improved, but the fear of him remained, and I became ill from work and the stress of it, so I moved out to live alone near my parents’ house. This was my first time living on my own, not for a cool reason like wanting to work hard and earn money and be independent, but because I wanted to be away from my father.

I didn’t want to feel like I was running away, but my body was at its limits. I started living on my own, cooking for myself, and doing housework. I enjoyed it tremendously! Then I remembered what the chiropractor had suggested to me. So I asked him to introduce me to the person who was looking for a housekeeper. And that was how I met him.

When the doctor told me a little about the man’s background, I felt he went through a lot just like me. But when I met him for the first time, he looked quite normal, unlike my image of him. To be honest, I had a variety of emotions in my mind before our meeting. But when I listened to his story I could understand it, and he seemed to understand my story, ecause he had gone through the same emotions that I had. What was most interesting to me was that he had been through something similar to my father, but had created a life on his own that transcended it. Seeing him overcome what was said to be impossible made me realize the infinite possibilities of masculinity within me. That’s how my work as a housekeeper began.

Despite his turbulent life, he lived in a huge house, like a mansion, and I was honestly a little excited to see a world I’d never seen before. The house had marble—something I had long dreamed of—a very spacious bath, and a garden. Above all, I was impressed by the spacious kitchen. It was easy to move around in, and I really enjoyed cooking. He and I had similar tastes in food, so cooking was the most enjoyable part of the housework.

At first, I was very nervous about what would happen to me, working for a man who lived alone, but his personality made me forget my worries and we had meals together during my break, which I cooked. I enjoyed talking with him while we ate, and I realized that I was looking forward to talking with him more.

Sometimes my fear of men would arise while I was cooking, but each time I faced those feelings without running away. I was always moved by the way he went from being a recluse with a fierce life to a man who wanted to change! I could see the change in my own masculinity as I interacted with him

The doctor advised him to do a rehabilitation program to help him get used to the outside world. I was to accompany him on outings and he would pay for them. I thought it sounded like an interesting job, so I agreed. He and I went to every one of the restaurants that he had wanted to go to in the past but couldn’t because he was a shut-in. I kind of wondered what it meant for the two of us to go out together, but I thought that it was just for work, so there was no problem.

I also thought it was okay because he was just doing what the doctor said, since he wasn’t good at making his own decisions. However, there was a gradual change in me, and I wondered if he perhaps didn’t dislike me and if we were going out together. Was he using me for his rehabilitation? I had a deep-seated sense of distrust and the feeling that I was being taken advantage of.

One day, when I told him I felt guilty having him pay for me all the time, he bowed his head and said, “The only thing I can do is pay for you. Let me pay!” Was I hearing him correctly? Something like that couldn’t be true. But I also came to the point of accepting his money (and love) a little more. There was no way I could ever like someone in the first place, I thought. I shouldn’t love anybody, and I was very afraid of getting serious about anyone.

I was full of self-denial like that, so I had been repressing my feelings for a long time. But he wanted to give me a gift for my birthday. At the time I thought it was his way of returning the favor.

I had always thought that there was no way anyone would like me. I jokingly asked him to throw a birthday party for me, and he actually went to an unfamiliar place by himself, bought a cake, prepared it with his clumsy hands, and to top it all off, sang me a birthday song. When I saw him singing for me with all his might, I was overcome with emotion. Who would do this for someone like me? I had never experienced anything like it in my life. I held back tears and had some cake. It became the most moving birthday experience of my life.

After that, I couldn’t keep my feelings to myself any longer. I naturally told him how I felt, and learned that he felt the same way. We started dating after that. I’ve had many encounters in my life, but this meeting process was very interesting and gave me a lot of new sensations.
I never thought I would have an experience like this, like a TV drama series where a girl goes to a man’s house to do housework and falls in love with him. It was interesting to me that I was able to have such a wonderful experience after becoming ill and running away to live alone.

In the past, despite having a phobia of men, I really wanted to know myself, so I had jumped into marriage-hunting parties and met various men. Each time I felt a change in the men who appeared in front of me after the dominos fell, as Instructor Tatsuya Nakamura said. I felt a change in my masculinity at the same time, and the process led me to my current relationship.

I wouldn’t have had this dramatic encounter without Miross. I’m so glad that I believed in Miross and didn’t leave. I’ve always received many gifts from programmers. Above all, I was happy that he didn’t reject Miross, as I’d had many sad experiences with people who didn’t understand it.

He’s getting more energetic, and I can see myself changing every moment through him. It’s a wonder that I can stay interested in a man for so long, because in the past I always became bored with them easily. The best thing in my life is encountering Miross. The second is that I met him. Both have turned my life around 180 degrees. Never in my life have I had such an enjoyable relationship! I have nothing but gratitude for the Programmer, Mr. Rossco and Ms. Midori!