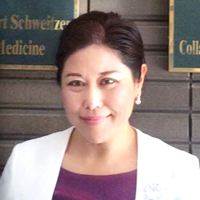 The Day My Inner Struggles Disappeared

by Ms. Yukari Akamine, Hospital Secretary and Researcher at the School of Medicine, Japan

Human concerns can fall into the three categories of interpersonal relationships, disease, and finance. To suffer from just one of them is a major burden, but Ms. Akamine struggled with all these issues. However, after understanding the mechanism of the world through Miross, all the problems she had simply disappeared. Miross is the “ultimate master key” to instantly resolving any problem we humans encounter. You can also obtain this key for your own use.

My life was all about “for someone else”.

My mother suffered from diabetes and rheumatism. I took care of her since I was in middle school. Every afternoon, I went home and did all the household chores, including cooking dinners and doing the laundry. I was young and wanted to go out and enjoy being with my friends, but my desire to help improve her conditions as soon as possible was much stronger than that.

I was the oldest of the children, and so my father was especially strict with me. I wanted him to take care of and protect his wife, but in fact, he ignored her and even cheated on her. I felt like he shirked his responsibilities and forced everything on me. I could not tolerate or trust him, and eventually, I started to feel the same intolerance and distrust towards all men.

In spite of my care and prayers, my mother passed away when I was 30 years old. Since childhood, I have been wondering what love is, and why marriages don’t always go well, even though meeting your partner should be a miraculous thing in life. Having kept such questions in mind, I eventually married a man with the exact opposite personality from the father I hated, as I was hoping to find love and freedom.

However, what waited for me in the marriage was in reality all about blind devotion to my husband and children, and I was not able to have any time for myself. The “love” I had long sought was totally missing from my life and I was forced to live a life far from the “freedom” I had dreamed of. Worse than that, both of my sons had troubles with the law, and my daughter suffered from autonomic ataxia and became mentally ill. My dream of a perfect marriage where I sought love and freedom was totally shattered. I got divorced and married another man, but it too had the same unhappy ending.

These experiences exacerbated my distrust for men, which made me more determined to live as a strong single woman, even trying to surpass men who usually have much more power in a chauvinistic society like ours. Around that time, I received a scholarship to study brown rice as a researcher in graduate school. In the laboratory I worked hard to prove myself to my male colleagues, and I was determined not to say “I can’t”. I was so exhausted by taking care of my children, the household, and my studies simultaneously that I began to suffer from undiagnosed physical symptoms, and both my body and soul were totally shattered. When I hit rock bottom, I encountered Miross.

Originally, I had been seeking answers to questions like “Why have I led such a life?” and “Who am I?” But when I encountered Miross I felt intuitively that the answers would be found here, and so I desperately threw caution to the wind to solve my issues once and for all by jumping into the world of Miross.

To know one’s true self

My intuition was right. Miross freed me from excruciating pain and suffering, and healed my heart and my soul.

I had been working on a study of brown rice, trying to complete it by myself. Relying on someone else, especially men, meant a defeat for me, and so I could not allow myself to show weakness to male colleagues.

However, after I met with Miross, I felt I could entrust my feelings to men and was able to say, “I can’t”. When I did, my professor suddenly started helping me with his full support, and everything began to go smoothly. As a result, I was able to complete my dissertation on schedule.

Also, my sons were able to get jobs they were interested in and my daughter was starting to regain her smile. There were also incredible events happening to me – the scholarship committee told me I did not have to pay back the scholarship funds, which was an unexpected benefit to my finances, and my undiagnosed physical symptoms disappeared soon after that.

Without knowing it, I have become an essential part of the laboratory. I am now filled with hope to present a completely new study on brown rice. Through the Miross system, I was able to redirect my life away from blindly dedicating myself to others into one where I was living life for myself. I’m enjoying myself to the full extent every day.

What do you think? Humans are born of their father and mother – one may say it is a matter of course but at the same time is life’s mystery. There is no exception to that. In other words, every one of us is composed of a father and a mother, which is to say, maleness and femaleness. This woman had despised her father, or inner maleness. Hating half of her own self created inner conflicts, and this imbalance created everything she saw in her life.

After learning the mechanisms through Miross, she understood that the father she hated had been created by her own assumptions. When she first realized that she in fact had been truly loved by her father, she was able to feel a true sense of gratitude to him. Next, her distrust for men naturally disappeared, and she was able to break free from her previous life by allowing herself to express her feelings to men for the first time.

As a result, her environment, including her interpersonal relationships, health and finances, immediately changed. Through her experiences, she proved that it is possible to solve any problem and dynamically transform our lives by applying the Miross system, which enables humans to achieve balance externally by achieving internal balance.