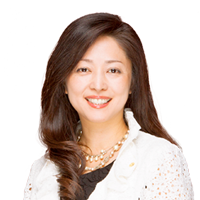 got married at the age of 25. The following year she gave birth to a baby girl. As a family of three, her life was always comfortable.

She showered her only daughter with much affection and provided her with enriching educational opportunities, including lessons to stimulate the right side of the brain as well as other lessons from a very early age. She became a “mother obsessed with her daughter’s education”, but then she started having problems in her private life with her husband and then with her daughter. Eventually, she fell into a state of depression and her health deteriorated. At that point, she became interested in spiritual world.

When she was 40 years old, she encountered a new healing method that was little known in Japan at that time. The following year she became a healer and launched a business of her own. Her business steadily increased. She had as many as 1,200 clients and distinguished herself in that field. She owned an office in Tokyo and appeared to be problem-free in her business and financial situation. However, her personal life suffered – her daughter suffered from a disease and was always sick, and she separated from her husband. Her family was failing.

Around that time, one of her clients introduced her to Miross, which struck her like a thunderbolt. Three years later, she decided to close her business and let go of her achievements and clients, and started a new life as a Miross instructor to spread Miross.
And now, she is one of the most popular instructors at the Miross Academy, traveling constantly across the country to give seminars and lectures.

“I finally was able to get the answers I have always been searching for!” Why can she say that with such confidence? How does this differ from the spiritual world she was in?
What happened to her relationship with her husband and daughter, and her daughter’s health condition?